20 Places to Visit Before You Die 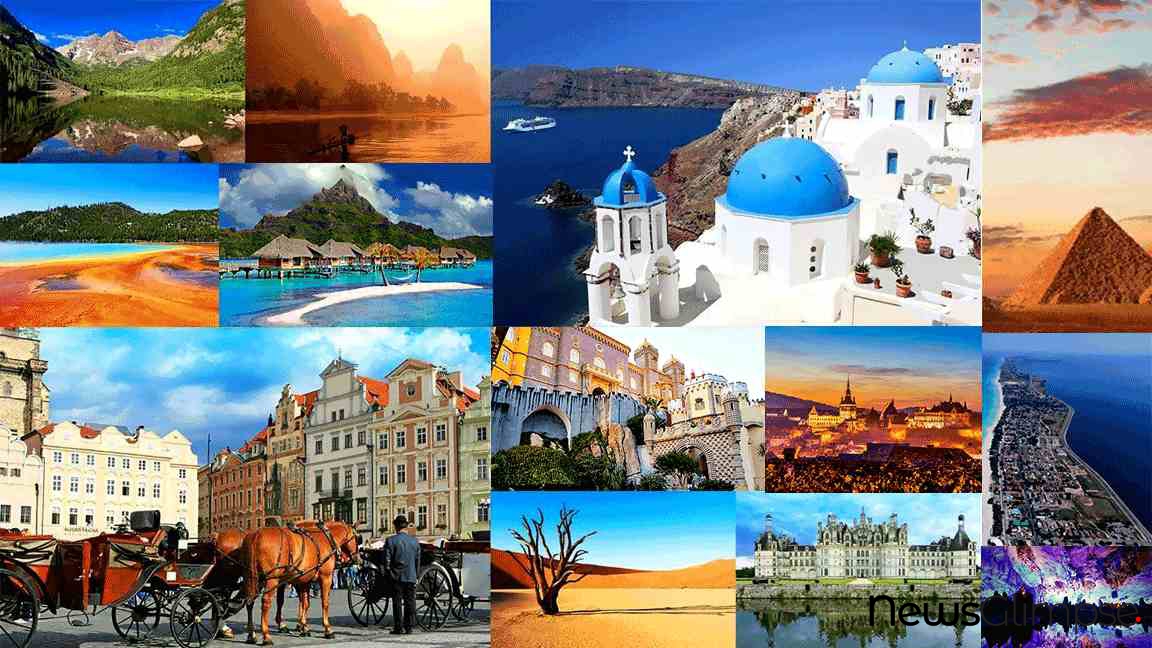 During your travels, you may want to stop by numerous intriguing places worldwide. Our earth is enormous, and it is brimming with fascinating places to visit. However, even if you are a frequent visitor or an ambitious explorer, it is impossible to see them all. The sheer amount of exciting destinations and fantastic places to visit makes it difficult for people to decide.

There are some destinations you must see at least once in your life among all the natural wonders, cities, and beach resorts. Each of these sites has a variety of attractions and things to visit, so there are different ways to get the most out of them.

Here's a list of 20 incredible places to visit around the world, including natural wonders and cities, beach resorts, and other breathtaking destinations:

20 Wonderful Places to Visit Before You Die

Miguel Island is the largest of the Azores' islands. It is also known as "The Green Island" because of its natural beauty. The Potholes Provincial Park, also known as the Natural Park of Ribeira Potholes. Ribeira Potholes is one of the most thrilling destinations in the world. Glacial erosion created these potholes, an excellent example of a unique environment. So, that's why it is one of our Most Amazing Places to Visit.

With over 1,400 miles, the Great Barrier Reef is the world's most extensive collection of coral reefs. It's so big that it can be seen from space, and it's one of the Natural World's Seven Wonders. It's the best site to go scuba diving, with a one-of-a-kind exhibit of marine life.

So, if you are a marine life lover this is one of the places to visit for you.

Portofino is a picturesque fishing resort in the Italian province of Genoa famed for its harbor. Portofino is a very popular vacation for nobles and also for celebrities. In addition, the village is known for its colorful buildings and modest harbor, making it a popular trip for Italian architectural enthusiasts.

As the only one of the Seven Ancient Wonders of the World that is still fully intact, the Pyramids of Giza are well worth a visit. The Great Pyramid of Giza, which dates back to roughly 2,560 BC, was the world's tallest man-made monument for almost 3,800 years. It's a wonderful place to visit for ancient freaks.

The Maldives are famed for their beauty and are one of the most thrilling locations in the world. So, basically, Maldives is a group of 26 islands which are located in the Indian Ocean. Thousands of visitors come from all over the world to see the islands, a major tourist destination. The Maldives are known for their magnificent beauty and five-star accommodations, making them an ideal destination for a genuinely opulent vacation.

Mostar is one of the prettiest cities located on the Balkan Peninsula. In southern Bosnia and Herzegovina, Mostar is a testimony to the region's history and people. The city, which is on the banks of the Nervetva River, is known for its architecture, which combines Balkan, Ottoman, and Austro-Hungarian influences. The Old Bridge, which overlooked the Neretva River and was erected in the Ottoman style in the 16th century, is Mostar's most famous structure.

Bora Bora is the famed tropical paradise's poster child. This island, located in the South Pacific, is 143 miles northwest of Papeete and boasts the magnificent blue waters, white-sand beaches, and lush flora you'd expect to find in the tropicsâ€“only better.

Lake Oeschinen is one of Switzerland's most beautiful natural beauties. It's near Kandersteg and has several mountain rivers that feed the lake. This is one of the most magnificent ice lakes, it is mainly recognized for its beauty and is popular for its fishing spot. The lake is frozen for at least five months during the winter, usually from December to May.

The Antelope Canyon in Arizona is a beautiful sequence of cracks that you wouldn't believe weren't created by a photographer until you saw it for yourself. Millions of years ago, water cut out the fissures, and the way the light hits each wall causes the rocks to appear to be various hues, creating a beautiful display.

Romania's Sighisoara is a magnificent medieval city. This city, located in Transylvania, is noted for its rich history and architecture. Sighisoara, built by Saxons in the 12th century, is one of Europe's best-preserved medieval cities. Vlad Dracula, the king of the local region Walachia in the 15th century, was born in the town.

Torrevieja is a town on Spain's Costa Blanca, quickly becoming one of the country's most popular tourist attractions. The beaches on Costa Blanca are known for being both sandy and stony. As a result, this is an excellent location for a summer vacation. The Salt Lakes (Las Salinas de Torrevieja) in the area, on the other hand, is a must-see for anyone seeking something different. The lakes, which lie west of the city, are recognized for their vibrant green and pink hues.

Maui is one of the gorgeous islands in the Hawaiian archipelago. It is also one of the largest islands in the archipelago, having a diverse choice of attractions and activities for visitors. Maui is noted for its large stretches of sand beach and waterfalls, and national parks. The island is also home to Haleakala, a dormant volcano popular site for adventurers.

Sintra is a lovely town in Portugal that attracts travelers from all over the world. Nestled between the mountains and the sea, this is one of Europe's most picturesque places. The city is known for its National Palace and a nearby Moorish Castle. The Pena National Palace (Palacio Nacional da Pena) is Portugal's most popular tourist attraction.

Raja Ampat, also known as the Pianemo Islands, is an Indonesian archipelago. There are four main islands and over 1500 smaller ones in the archipelago. The islands are noted for their abundant marine life and their breathtaking natural beauty. For a good reason, Raja Ampat (The Four Kings) is one of the world's most famous tourist spots. It is very well-known among nature lovers.

Sulawesi is one of Indonesia's major islands. Sulawesi is noted for its breathtaking natural beauty, including six national parks and nineteen wildlife reserves. This is a fantastic area for all nature enthusiasts to enjoy themselves. On the island, there are three marine protected zones. Divers and other water sports enthusiasts will love the smaller neighboring islands, albeit Sulawesi has abundant diving options.

In Jamaica, Montego Bay is a renowned tourist attraction. This is the country's second-largest metropolis and a popular tourist destination for travelers worldwide. This is partly due to the enormous number of cruise ships that visit the area. However, that isn't to suggest that cruises are the only way to see Montego Bay; the city also has an airport, so visitors from the mainland can fly in.

The Reed Flute Caves are transformed into a spectacular experience by multicolored lights that illuminate the 240-meter-long cave system. The amazing stalactite, stalagmite, and pillar formations, which have been one of China's most popular attractions for over 1,200 years, are well worth the trip.

Are you prepared to be wowed? When you go to Victoria Falls, you will be. This waterfall is a mile long and 354 feet tall, with a width of one mile. It is the world's largest single waterfall because of this, as well as the fact that over 260,000 gallons of water flow over the brink per second.

So on summing up, which of these locations will you visit first? If you're looking for a stress-free vacation, these above-mentioned places to visit are the best places to go and enjoy. You can personalize your holiday based on your budget and desires. So, don't put it off any longer and cross one of these destinations off your bucket list.