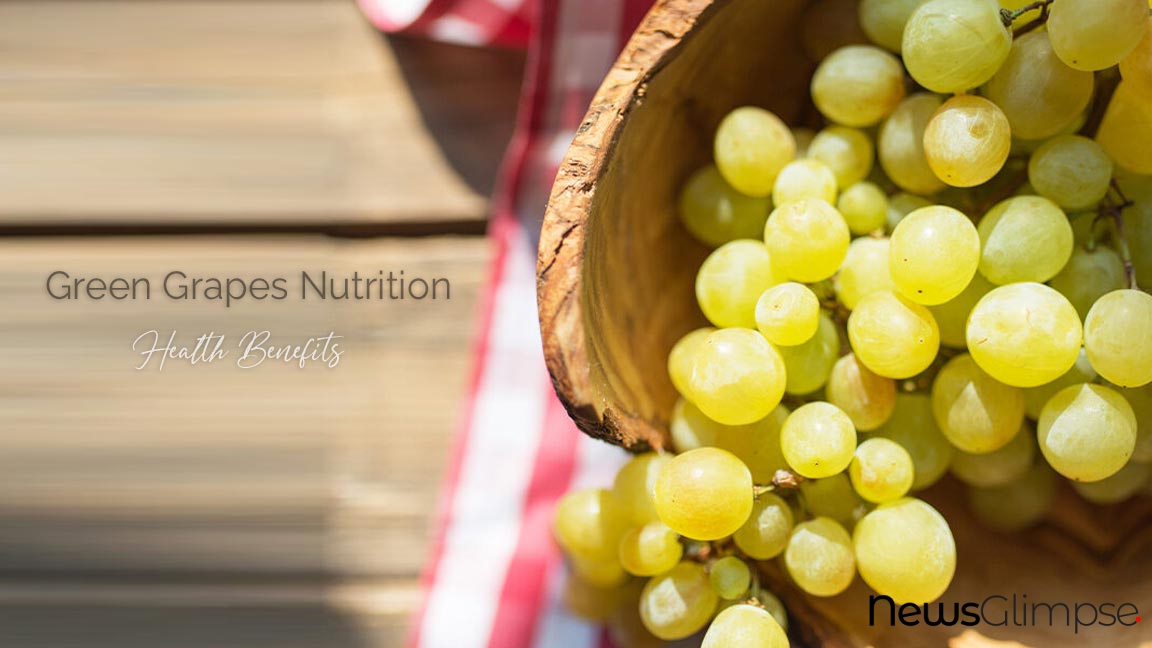 When you think of vitamin C, you may automatically think of oranges. Did you know, though, that grapes are a good source of vitamin C? These small globes are jam-packed with nutrients like antioxidants, vitamin K, and potassium, among others. Fresh grapes are a naturally sweet snack that is high in vitamins C and K as well as other phytonutrients.

"Grapes are excellent since they are both inexpensive and adaptable," says the author. "They're versatile and can be employed in a variety of recipes and scenarios." Let's talk about the nutritional and health benefits of green grapes, as well as how to include them in your meals.

Grapes provide 62 calories, 0.6g of protein, 16g of carbs, and 0.3g of fat per cup (92 grammes). Grapes are high in vitamins C and K and are a good source of both. The following is a list of green grapes nutrition facts.

Grapes are almost fat-free, containing less than 1 gram of fat per serving.

Grapes have only 1 gram of protein per serving. They work well with cheese and nuts, both of which are high in protein and can help you create a balanced and enjoyable snack.

Vitamin K and manganese are both abundant in grapes. You'll also reap the benefits of a healthy dosage of vitamin C, which boosts immunity and aids in wound healing.

Vitamins, minerals, and antioxidants abound in grapes. They're also high in water, so they can help you stay hydrated. Here are some of the health benefits of green grapes.

Because grapes are high in vitamin C, they may aid in the battle against bacterial and viral illnesses such as yeast infections. "Our bodies are better prepared to fight off and prevent any abrupt, short-term disease if we have a healthy immune system,"

Polyphenols, which are found in grapes, are potent antioxidants. Anti-inflammatory and antioxidant effects are thought to exist in these. Resveratrol is one of them. It can be found in red grape skins.

Resveratrol has been shown in lab experiments to reduce or prevent the growth of cancers in the lymph nodes, liver, stomach, breast, colon, skin cancer, and leukaemia.

Grapes contain 6% of the daily value for potassium in one cup (151 grammes). This mineral is required to keep blood pressure in a healthy range. Potassium lowers blood pressure by assisting in the dilation of arteries and veins, according to research. It may also aid salt excretion and reduce artery and vein narrowing, which would otherwise raise blood pressure.

However, a review of 32 research found that both too low and too high potassium consumption might lead to high blood pressure. The current daily intake level of 4.7 grams was recommended by the researchers.

Grapes include compounds that may help guard against high cholesterol by reducing cholesterol absorption. In 8-week research, consuming 3 cups (500 gram) of red grapes each day helped lower total and LDL (bad) cholesterol levels in 69 patients with high cholesterol. White grapes, on the other hand, did not have the same effect.

Furthermore, studies have indicated that diets strong in resveratrol, an antioxidant found in grapes, such as the Mediterranean diet, can lower cholesterol levels.

Resveratrol may be useful for more than just cancer prevention. It has also been demonstrated to aid in the prevention of heart disease.

A study also found that those who ate more potassium than sodium in their diets were less likely to die of heart disease than those who ate less potassium.

Antioxidants are substances that aid in the repair of cell damage produced by free radicals, which are dangerous chemicals that cause oxidative stress. Several chronic health disorders, such as diabetes, cancer, and heart disease, are linked to oxidative stress.

Grapes are high in several potent antioxidants. Antioxidants are present in the highest quantity in the skin and seeds. However, a variety of factors, including grape varietal, maturity, post-harvest storage, and environmental factors, might change their concentration. These beneficial components, interestingly enough, remain present after fermentation, which is why wine is also an antioxidant source.

Anthocyanins, a class of flavonoids that give grapes their orange, red, blue, pink, and purple hues, are found in larger concentrations in some grape varietals. Grapes also include potent antioxidants such as vitamin C, beta carotene, lutein, and ellagic acid.

Though a study reveals the antioxidant's promise in avoiding cognitive impairments, more human research is needed to fully understand whether it is beneficial.

8. Aids In The Prevention Of Diabetes

Grapes include 23 g of sugar per cup (151 gram), so you might be wondering if they're a good choice for diabetics. If you look at their glycemic index (GI) rating, which is a measure of how rapidly a food boosts your blood sugar, you'll notice that it varies from 49 to 59 depending on the grape variety.

9. It Helps You Sleep Better

Do you struggle to obtain a decent night's sleep? “ Grapes contain a little amount of melatonin, making them an excellent evening snack. They're low in calories and may be able to assist you in falling asleep."

Grapes include plant components that may protect against common eye illnesses. In one study, mice given grapes showed fewer symptoms of retinal damage and had greater retina function than mice who were not given the fruit.

Additionally, resveratrol was discovered to protect retina cells in the human eye against ultraviolet A (UVA) light in a test tube investigation. This could reduce your chances of developing age-related macular degeneration (AMD), a common eye illness.

Glaucoma, cataracts, and diabetic eye disease may all be protected by resveratrol. Grapes also include the antioxidants lutein and zeaxanthin, which have been demonstrated to aid in maintaining eye health, improving visual function, and preventing age-related eye illnesses.

Grapes are high in potassium, manganese, and vitamins B, C, and K, all of which aid in the prevention of osteoporosis, a disease characterised by brittle bones. Resveratrol has also been shown to enhance bone density in both animal and human trials.

For example, rats given freeze-dried grape powder showed greater bone absorption and calcium retention than rats who did not receive the powder in an 8-week trial.

12. Protect Yourself From Germs And Fungus

Grapes include several chemicals that may protect against dangerous germs. Resveratrol, for example, has antibacterial characteristics that prevent bacteria and fungus-like Campylobacter and Candida albicans from growing.

It may also help to prevent food poisoning. Resveratrol, when added to a variety of foods, inhibits the growth of dangerous bacteria like E. coli. Anthocyanins, which may break bacterial cell walls, are another antibacterial component found in grapes.

Finally, grapes are high in vitamin C, which is known for its immune-boosting properties.

13. Slows Down The Ageing Process

Grape plant components may influence ageing and lifespan. Resveratrol has been shown in studies to slow the ageing process by imitating the benefits of calorie restriction, such as lowering oxidative stress, increasing stress tolerance, and improving inflammatory response. Remember that these advantages have only been observed in animal research.

Furthermore, resveratrol stimulates the SirT1 gene, which has been related to longer lifespans and is activated by low-calorie diets. Resveratrol also stimulates sirtuin, a protein that controls biological processes such as cell death and ageing.

Chronic inflammation plays a critical role in the development of long-term health issues such as cancer, heart disease, diabetes, arthritis, and autoimmune disorders, while low-level inflammation is a normal biological response. Anthocyanin and resveratrol chemicals found in grapes, for example, have been related to anti-inflammatory qualities.

Grapes include several essential minerals as well as potent plant chemicals that are beneficial to your health. Even though they contain sugar, they do not appear to have a deleterious effect on blood sugar regulation when consumed in moderation.

Most of the advantages of grapes come from antioxidants like resveratrol, which have anti-inflammatory, anti-diabetic, and anticancer characteristics. They're also incredibly tasty and simple to incorporate into your diet. Fresh grapes, rather than grape juice or wine, provide the highest health benefits. Interleukin-6 (IL-6) and pha) (IL-6)